Photo courtesy of Montgomery Parks
Needwood Mansion is a  Federal-period brick dwelling built in 1857 on land granted in 1758 to John Cooke in the region now known as Rock Creek. Today it houses offices of the Park and Planning Commission of Montgomery County, Maryland. The Mansion is not open to the public, nor is it mobility accessible or available for functions, but you can walk the grounds and trails to Lake Needwood. There is an interpretive sign in front of the mansion. The Archaeology offices are in a later wing on the left (hidden in this photo).

Misfortune:  At the outbreak of the Civil War, on June 26, 1861, tragedy struck the Robertson family when William George Robertson was killed on horseback by a bolt of lightning outside of the entrance gate to his new house. He left his wife, Mary Victorine Key Scott, a widow with eleven children. His mother Harriet Cooke Robertson, a widow herself by this time, took on the task of helping Mary Victorine raise her children. 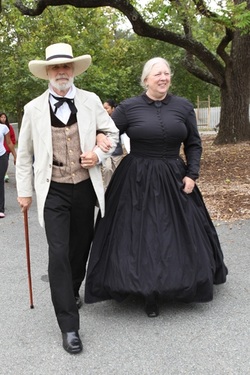 Civil War associations:  The oldest son, William George Robertson, Jr., enlisted as a member of Mosby's Rangers (aka Raiders) of the Confederate Army during the Civil War. Because of this, Sunnyside was suspect and under scrutiny during the war as a haven for Confederates. At one point, the widow Robertson was reportedly saved from being arrested by appearing on the porch with a baby in her arms. The Battle of Rickett's Run, a fight between civilians from Sandy Spring and eleven members of Mosby's Raiders, occurred in close proximity to Sunnyside. A letter written by a principal character in the battle mentions that "the Rebs took the road by Emery Chapel (now Emory Lane) through Wm. Geo. Robinson's (Robertson's)  and out to Rickett's Creek."

The Robertsons were reported to have stored their grain inside the house as well as stabling horses indoors when there was a threat of confiscation. After the war, William George, Jr., attended a reunion and offered "A tribute to Mosby's Raid at Berryville, Virginia" in which he refers to himself as a veteran of Mosby's command.

Post-Civil War Era:  Mary Victorine and her children moved from Sunnyside to Baltimore after the death of Harriet Cooke Robertson in the 1870s. Mary Victorine was originally from Baltimore, being the daughter of a prominent Baltimore lawyer and a relative of the Key (Francis Scott Key) and Fitzgerald (F. Scott Fitzgerald) families.

Sunnyside was probably rented until it was sold in 1881 to George Washington Columbus Beall of the Beall family (pronounced "Bell") that had been established in Montgomery County since the early eighteenth century. Oral history claims that G.W.C. Beall burned down the slave quarters upon arrival at Sunnyside. Beall and his wife, Mary Anne Palmer of Woodlawn, experienced prosperity at Sunnyside, contributed to the social prosperity at Sunnyside and contributed to the social and economic growth of the community. The Sentinel newspaper mentions in 1904 that "the leap year dance at Mr. Columbus Beall's home, Sunnyside, near Derwood, this county, was a great success."

Lightning struck again in 1913, severely damaging a log house pre-dating the brick house and attached to the east side. The east frame wing replaced the log house. The west wing (hidden by trees in the photo) dates from 1958. Nearby stand a notable two-story stone outbuilding and a log outbuilding.

Edward Palmer Beall and Frank Beall bought out the other heirs when their father died. In 1925, they converted Sunnyside from general farming to dairying. Since the railroad was less than an mile away in Derwood, the milk could be conveniently shipped to the cities making dairying a successful venture. The Bealls sold the farm after almost seventy years of ownership to the Stickles in 1948.

Early Land History:  Needwood, a large brick edifice of generous proportions, traces its history back to the original land patent of 1000 acres entitled Needwood. The Needwood patent was granted to John Cooke, a pioneer of the region, in 1758. A dwelling house and many log houses are listed on the patent and described as "very leekey and indifferent, being very old ...." The Needwood patent was sold in parts and resurveyed. In 1832, William Robertson purchased 759 acres of the land from William Wooton. The Robertsons had settled in the area in the 1700s at Milton Farm, which later became associated with Muncaster Mill. William Robertson married Harriet Cooke, a grand-daughter of John Cooke who later inherited 850 acres considered the "middle portion" in the stretch of Cooke's land that ran from Rock Creek to Crabb's Branch. William Robertson's land holdings, through his wife's purchases, grew in size. He established himself a prosperous farmer in the Rock Creek community.

Sunnyside:  In 1842, he deeded to his son, William George Robertson, that parcel of 759 acres which he had purchased in 1832 together with the buildings and improvements located on the property and "also the following Negroes, namely Margery, Levi, Sally, Solomon, Ephraim, and Bill..." During this time, the farm became known as Sunnyside. Robertson acquired one of the first insurance policies sold by the Mutual Insurance Company for his new property as a "one and half story, log dwelling, weatherboarded and plastered throughout and well finished - one chimney - ashes kept in an iron vessel under cover." There is also a description of a detached log kitchen, a log meathouse and other outbuildings. Some of these buildings were possibly constructed on the property before Robertson ownership. As the 1758 patent enumerates,there is record of log structures throughout the Rock Creek region in the early days of settlement.

Prosperity: In 1857, William George applied for a new policy to include his recent construction (1856): "a new two story brick dwelling with slate and adjoining former wooden building - 5 rooms and passages - 2 chimneys - built and finished in a substantial manner." William George Robertson, in building his new brick dwelling, was giving evidence that he had become a wealthy planter who owned a large and busy plantation that employed the use of slave labor. The new dwelling was constructed in the style of the late Federal period and incorporated Greek Revival details. The design was reminiscent of the fashionable townhouses of merchants in Georgetown - not a farmhouse built in the country by a farmer.

Modern Times:  Mr. Wilmer Stickles became the president of the Montgomery County Farm Bureau and was representative of the post-World War II era of gentlemen farmers. After Mrs. Ruth Stickles researched the history of the estate and discovered the original Needwood patent, the name of the farm was changed from Sunnyside to Needwood. The house and farm were sold to Eckles family who, in turn, sold it to The Maryland-National Capital Park and Planning Commission in 1963. Both the Stickles and Eckles continued the dairy business begun by the Bealls although they greatly improved and modernized the facilities to meet health regulations.

Needwood Today:  When Needwood was acquired by the Maryland-National Capital Park and Planning Commission, developments of the land included the construction of a golf course and the damming of Rock Creek to create Lake Needwood. Due to periods of rental and the ravages of time, the house has undergone a continuing process of restoration under M-NCPPC ownership. Today, Needwood houses the offices of the Parks Department and is a successful example of adaptive reuse in preservation.

PDF brochure: similar but more detailed than the above
The Robertsons' genealogy
PDF scan:  Maryland Inventory of Historic Properties - Needwood Mansion
PDF file:  Places from the Past, Central County